RJB PAC Ltd is a young but vastly experienced company. It is based in Leeds in between the M1 & M62 motorways, and is the ideal location for any potential customers.

Jon Mchale & David Mchale are brothers who have over 50 years’ experience within the print industry. Jon Mchale was the last apprentice to be employed to serve a four year city and guilds apprenticeship at John Waddington’s Ltd in 1982. In 1997 Jon started his first trade house in Leeds originally employing 2 people on a single gluing line but eventually growing the business to employ 45 people and to run four gluing lines, 2 window patchers and 2 die cutters on a continental shift basis. In 2009 Jon decided to take a break from production and concentrated on the buying and selling of print related machinery all over out the world and spent time consulting for various large companies throughout Europe. In 1992 David Mchale started working in the print industry, initially in design before moving into production. Since 2005 he has worked alongside Jon and has become an expert in trade print finishing, machinery sales & renovation. In 2012 Jon, David & RJB PAC decided to re-start the production side of the business at the request of some of its long standing former customers who had missed their expertise, reliability and honest way of working.

After using RJB Pac for extra capacity my buisness turnover rose by 20%.

The refurbished window patcher I bought from RJB Pac Ltd is as good as new. 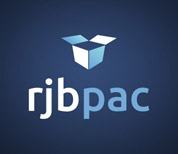 RJB have moved to Ossett , Wakefield to help cope with the huge demand from blue chip customers to window patch & glue there excess work. RJB now have a 6,000 square foot […]

We are pleased to announce our new website has now launched!